The Evolution of In-Car Navigation: From Dashboard to Smartphone, and Back Again

The Evolution of In-Car Navigation: From Dashboard to Smartphone, and Back Again 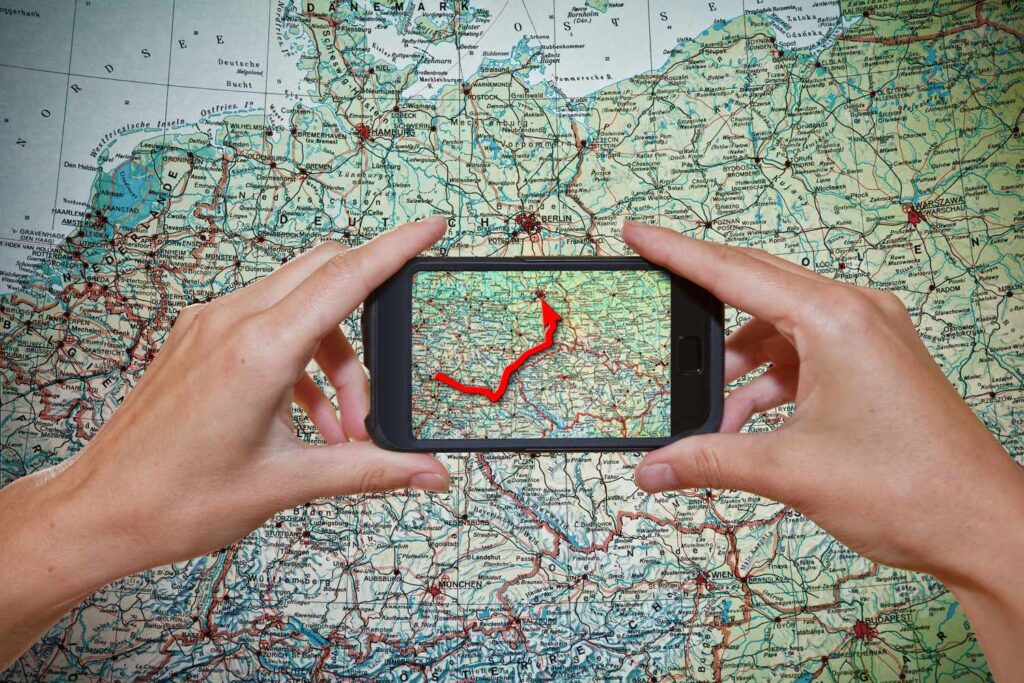 As long as cars have existed, drivers have needed help getting from place to place (even if some folks are sometimes too proud to admit it). From bulky street maps that never seemed to fold back in the way they folded out, to thick Thomas Guide books that left many a passenger frantically flipping pages and plotting coordinates, navigation has always been a crucial part of the automotive experience.

The advent of digital technology and satellite imaging gradually displaced paper street maps, and the first GPS equipped automotive navigation systems found their way into cars in the early 1990s. Over the next few decades, a billion-dollar automotive navigation industry took shape, with device manufacturers like Garmin, TomTom and others leading the way. The personal navigation device (PND) market peaked in 2011, when over 48 million devices shipped worldwide. It seemed as if every car that rolled off the line was equipped with some form of navigation technology, and drivers became accustomed to looking to their dashboard for turn-by-turn directions.

Just two years later, though, worldwide PND shipments had been cut in half, and the device makers who were riding high for the previous decade found themselves in deep trouble. The technology had gotten better, not worse, and there was no corresponding drop in automotive sales to explain the change. What, then, was different?

That question has a very simple answer, as it turns out. In September, 2008 Google released the first version of the Google Maps app for Android devices, and soon thereafter became the default navigation solution for iPhones as well.  Suddenly, anyone with a smartphone could access a real-time, precise navigation solution complete with turn-by-turn voice directions…for free.

In 2012, Apple dumped Google Maps and launched their own navigation solution, a somewhat hastily pushed-out release that angered many but has improved over time and is now a native app on every iPhone. Like digital cameras and personal digital assistants before them, standalone personal navigation devices were essentially consumed whole-cloth by the ever-expanding functionality of the smartphone. While a market still exists for in-dash navigation products, the average consumer has become accustomed to turning to their favorite app for directions, and that doesn’t look likely to change any time soon.

The Power of Crowdsourcing

The question of which app consumers use, though, has become more interesting over the past few years. Around the same time that Google Maps was being developed and brought to market, a small company in Israel called Waze was developing and iterating its own navigation solution. By July of 2012, Waze had reached 20 million users, a number that doubled over the next year. Waze did things a little differently than Apple and Google, providing not only GPS navigation and turn-by-turn directions, but also real-time traffic updates and alternate route suggestions based on information pulled from millions of other “Wazers” out on the road. By promising to not only get drivers where they were going but to get them there in the fastest and most efficient way possible, Waze found its way into the hearts of commuters everywhere.

Knowing a good thing when it sees one, Google purchased Waze in 2013. The company continues to run independently and now counts over 65 million monthly active users in over 185 countries, and Google Maps, Apple Maps and most other navigation solutions now offer some form of the community-driven features that Waze pioneered.

The Dash back to the Dashboard

In an interesting turn of events, the very same apps that led users to abandon PNDs in the first place are helping spark interest in a new generation of in-car devices. Consumers want to use the mobile apps they love in their cars without the burden of handling their phones while driving, and technologies like Apple CarPlay, Android Auto and Abalta’s WebLink are enabling that experience. Along with music services and other productivity apps, popular navigation apps are among the key drivers of next-generation connected car solutions.

For Waze, which has become arguably the most popular navigation app in the world, that use-case is a bit complicated. Anyone with an Android Auto-enabled head-unit and an Android phone can easily access the app in their car, but the same is (perhaps unsurprisingly, given their corporate parentage) not true of users who have iPhones and/or Apple CarPlay equipped devices. In other words, Apple CarPlay supports Apple Maps, but not Waze. So, what’s an iPhone using Wazer to do? Sit in traffic and lament their fate? Thankfully, that’s where platform-agnostic solutions like WebLink come in. In January of 2018, Waze debuted support for the WebLink in-car solution on both iOS and Android versions. That means that anyone with an iOS phone and a WebLink-enabled head-unit (currently available from JVC and Kenwood) can now enjoy Waze in their car, no questions asked.

The in-car navigation market has seen dramatic changes over the past few decades, and it’s certain that more enhancements and advancements are in store in the years to come. Who knows where the road will lead from here…